“The depiction of Dr. Bennet Omalu and his findings, regardless of how they are presented, will be a catalyst for questions like, ‘what can be done?’ ,” said Dr. Henderson, who is on the forefront of studying TBI and related complex conditions. “The answer to that is here in Denver, where we’ve applied a patent-pending method of regenerating brain cell function. Patients get better and stay better.”

According to Dr. Henderson, most TBI treatments are off target, and usually a litte bit of trial and error for most practitioners. “It’s hard to diagnose, so treatments can often do more harm than good.”

Henderson and colleague Larry Morries, DC have honed a new TBI treatment featuring high-powered near-infrared light therapy (NILT) that has shown to be effective, as published in the journal, Neuropsychiatric Disease and Treatment, last month.

The study, “Treatments for traumatic brain injury with emphasis on transcranial near-infrared laser phototherapy,” found that a specific high-powered, near infrared light can effectively re-energize damaged brain cells after penetrating the skin and skull. All the patients in the study reported significant clinical improvement in their condition with no negative side effects, according to researchers Drs. Henderson, Morries and Paolo Cassano of Massachusetts General, who co-authored the study. Their multi-watt infrared light treatment is very different and more effective than low-power, LED infrared devices which do not penetrate the skin, based on research by Henderson and Morries.

With a “medical breakthrough” like this, the awareness caused by the movie could cause a rapid increase in demand for this treatment, said Henderson. For example, the Centers for Disease Control report over 2.5 million emergency visits for concussions and TBI annually. Symptoms can include headaches, speech irregularities, confusion. memory problems, lack of impulse control, sleep disturbance, anxiety, depression, and for some, suicide.

“The need is enormous, with major implications for a treatment as promising as NILT. That’s why we’re seeking support through a non-profit organization called Neuro-Laser Foundation so we can begin a new clinical TBI trial in 2016 in a fully-equipped clinic prepared to handle the volume,” Henderson said.

The Neuro-Laser Foundation is a non-profit organization based in Denver, Colorado, dedicated to advancing technology and treatment that will increase quality of life for people impacted by traumatic brain injury and other complex psychiatric conditions. More information is available at TBI.care or by calling (702) 493-1101. 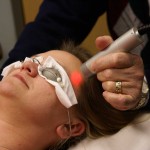